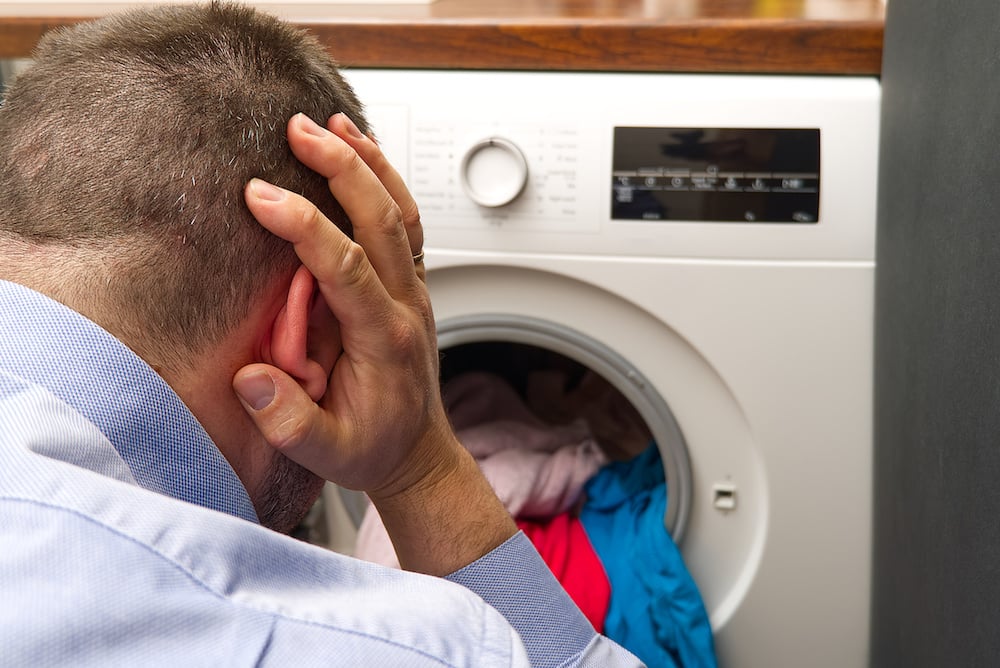 Here’s a look at the ten most common washing machine problems, along with solutions to remedy the situation.

Puddles – or worse – around your washing machine can have a variety of causes. Let’s start with the simplest to fix, which would be a loose water hose connection between the washer and the wall. The hose can loosen due to the constant vibrations from washing machine cycles. If you suspect your leaking washing machine is the result of a loose hose connection, all you have to do to fix it is tighten the hose.

If that’s not the issue, the washers or seals may also be worn out. Washers sit on the water fill hose and ensure no water escapes. Time, though, causes the washer’s original shape to distort, allowing water to pass through and causing a leak, so it’s important to replace washers when they lose their form.

Finally, it could be a deteriorated drain hose. Cracking, abrasions, and other damage happens to hoses over time; in fact, hoses typically only last about five years before they need to be replaced (for a longer lifespan, switch out rubber hoses for steel braided hoses).

To check hoses, disconnect your washer machine from the power source and either open the cabinet or unscrew the access panel from the back. The inside of a washer contains many internal hoses, so make sure to check each for any signs of damage that could be causing the leak. Keep your eyes out for clues like calcium deposits or rust.  If you do find a damaged hose, you’ll have to replace it. Don’t worry though – it’s actually a very quick process! Follow our step-by-step guide to replacing a washing machine hose.

Washing machine vibration problems are common. Loud noises could simply mean something is bouncing around, e.g. coins from the pocket of a pair of pants. Sometimes these items can go through a cycle with no problem, but other times they may get caught in your washing machine’s inner drum. Usually, these items will fall into the sump hose or filter making them easy to remove. Other times, they stay in the drum, rattling around with each cycle.

If the items are in the drum, slowly turn the drum until the object falls into the hose or filter, where it can then be removed. It might take a while but eventually, you should be able to get rid of the obstruction.

If a trapped object is not the cause of the problem, the drum may be damaged or there may be a faulty internal component, such as the motor. A professional technician will need to fix these problems for you; ultimately, it may be in your best interest at this point to simply purchase a new washing machine.

It’s not unusual for a washing machine to move about a bit during a wash cycle. However, if it’s bouncing around loudly, there could be another issue. Most commonly, this simply means the washing machine isn’t level on the ground. Try adjusting the legs, and use a bubble level to be sure you’ve got it set up correctly.

If the problem only presents itself occasionally, it could simply mean you have an unbalanced load. When it’s vibrating noisily, stop the machine and open it up to see if there are more clothes on one side of the drum. If that’s the problem, move the clothes around and try to spread them as evenly as possible. Be sure to check out our blog Small vs. Large Loads of Laundry: Which Is Best for a Washing Machine?

If the problem is not leveling or load size, you may have faulty suspension rods. Sometimes they become disconnected which can cause your washing machine to bounce around. If the suspension rods are defective, they need to be replaced by a technician.

If your washing machine won’t spin, it’s often because it’s overloaded with too much clothing or linens. Overloading the appliance can stop it from spinning, so try removing some items. If that’s not the issue, you may have a blocked drain pump. This can happen when something gets stuck in the outlet pipe, which stops the flow of water in and out of the machine. See #7 for how to remove blockages.

If an unbalanced load or blockage is not the culprit, there may be a faulty internal component, such as the motor or the control board. To fix these components or replace them, you need to take the panels off the washer so you can check them with a multimeter. If they are faulty, they will need to be replaced by a technician.

Drum not filling with water? First, check the water hoses. These may simply be kinked, stopping the flow of water, or there could be a blockage inside that needs to be removed.

If the washing machine is humming but not filling with water, this indicates that it is trying to take water in but can’t, so check the taps. These can sometimes get clogged with dirt preventing a flow of water through the hose. To fix the problem, turn the taps off to clean them. If the hot tap is blocked, you’ll have to drain the hot water tank first. Do this by disconnecting the hose and turning the tap on till the tank is drained.

If you are getting a flow of water through your hose but your washer is still not filling with water then the problem could be with your water valve. It may just be a matter of cleaning the filter. If the water valve filter is clean then the issue could be due to the valve’s connectivity. Unless you’re a pro, you’ll want to call in a technician.

The washer door typically won’t open while the drum is filling with water, but what if it won’t open even after it’s done filling? First, try turning your washing machine on to a new cycle, which should drain it and allow you to open the door. Then, check the drain and filter to ensure there is no blockage (see #7 for dealing with blockages).

It’s also possible that your washing machine has overheated, which can happen if you’re washing load after load. When it overheats, your appliance may still be powered on as normal but the washing machine sensor will not allow the door to open. Thankfully, overheating is usually a problem that will rectify itself. Just give your appliance time to cool down and then try the door again.

If a blockage or overheating isn’t the problem, and your door won’t open even when there is no water in it, it could be caused by a faulty door switch or the control board. These internal elements will need to be checked by a technician

If your washing machine doesn’t drain properly, you may have a blockage in the washing machine’s draining system. A blocked washing machine drain pipe is typically the result of soap residue buildup, leftover dryer lint, items from pockets (tissues, coins, etc), or grease, oils, and other materials on clothing.

First, check the filter for debris. The filter is usually located at the front of the washing machine and can be twisted out. Remove any blockages you find. If the filter is free from blockages, you’ll want to check the hoses. To do this, you’ll first want to manually drain the washer. Then, pull your washer out from the wall and disconnect the power and the hoses. Check the hoses for any blockages and remove any you find.

After accomplishing these tasks, set your washing machine on a short wash/rinse cycle. If the block has been successfully cleared then the water will drain away and you’ll be back in business. If it doesn’t, the block hasn’t been completely cleared or there is a more serious issue that will require a technician (or possibly a new appliance).

Washing machines may begin to smell due to a build-up of bacteria and grime. This often occurs when only cold washes are performed. First, try running on a cycle with hot water; this should do the trick. If it doesn’t, try taking it for a spin with this safe mixture of ingredients:

If the smell persists, check the filter on your washing machine. The drain trap filter can contain a lot of buildup from debris from your clothes.

Pro-tip: To avoid unpleasant smells, remove any laundry as soon as it’s been washed. Leave the door open instead of closed when the washing machine isn’t being used to allow moisture to escape from the machine.

Finding small holes in your clothes following a wash? One of the easiest things you can do to prevent holes in clothes during the washing and drying process is to do a better job of sorting clothes before you wash them. That means never washing a delicate item with heavy jeans or clothes with zippers and studs. Lace and silky fabrics can snag on zippers and even embellishments like beads and sequins.

Chlorine Bleach could also be the problem. Using too much, or not allowing the bleach to thoroughly mix with water before putting in clothes, can cause holes.

You should also consider spin cycle speeds. If you’re using a final spin that is too high for the type of fabric you are washing, clothing can be pulled into the tiny holes and crevices of the washer drum and cause fibers to wear and tear.

Lastly, overloading the washing machine can damage clothing. Overloading not only affects the cleaning level of each cycle but can also cause garments to get hooked on zippers, decorations, and buttons on other clothing. Always zip, button, and fasten all clothing before washing and turn items inside out.

When a washing machine won’t turn on or stops during a cycle, it’s usually a problem with the power source. Check your circuit breaker first; it may simply need to be reset. However, if it is tripping every time you plug the washing machine in then you may have a bigger issue that an electrician will need to solve.

A blown fuse may be the culprit. However, if the appliance’s lights are working, it’s not a fuse. So, you’ll then want to check the socket. Try plugging something else into the socket and see if it works; if it doesn’t, the socket is faulty, not your washing machine.

We know that not everyone is a natural DIYer. If you’re having washing machine problems related to plumbing, contact the professionals at Express Sewer and Drain in Sacramento, CA. We’ll get your washer cleaned up and you back in business!