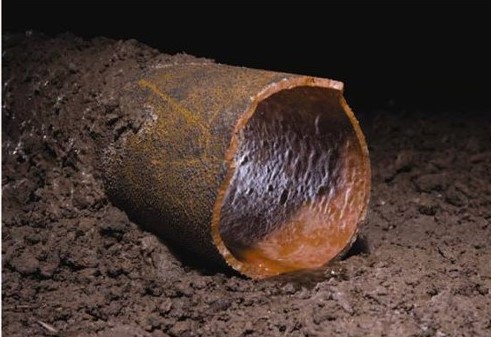 Do you know what type of sewer piping your home has? If you’re like most homeowners, you only think about your sewer pipes when something goes wrong—like when you have a sewage backup or drain problem.

Knowing what type of sewer pipe you have, however, can help you:

Here’s a look at the various types of sewer pipes that are typically used in homes. Whenever you need help diagnosing and repairing issues with your drain and sewer system, don’t hesitate to contact Len The Plumber.

We offer 2-hour response times for all drain and sewer emergencies, and we never charge extra fees for after-hours emergency service.

Orangeburg piping, also referred to as bituminous fiber piping, is made of wood pulp sealed with coal tar. It was widely used during World War II due to its cheap cost and the shortage of cast iron. Orangeburg sewer pipes continued to be widely used up until the 1970s.

Originally, Orangeburg piping was intended for dry use in electrical and telecommunications applications—not for water and sewage uses. Consequently, Orangeburg sewer pipes are not as durable as other types of sewer pipes, and they are far more susceptible to:

Far more durable than Orangeburg piping, cast iron sewer pipes were widely used in homes built before the 1960s. These types of sewer pipes were typically installed with vertical drain systems, and they tend to last about 30 years.

Despite their durability, cast iron sewer pipes are prone to corrosion and rust, as well as waste buildup due to their uneven interiors. That means that, as cast iron piping ages, it can be far more susceptible to:

Clay sewer pipes are another type of piping used before and during the World War II era. These pipes, made of a clay-shale blend, can last for 30 or more years. They are environmentally friendly and inert, making them resistant to chemicals and acids.

Despite their advantages, however, clay pipes are brittle and porous, making them susceptible to:

Concrete has been used both as an encasement for clay piping and as a piping material itself. Concrete sewer pipes are extremely durable and have an average service life of about 30 years. Along with plastics, concrete is considered a new-generation material for sewer pipes.

While concrete sewer pipes are not immune to damage or aging that can trigger the need for repair or replacement, this type of sewer piping is currently popular because of its affordability, strength, and longevity.

PVC (polyvinyl chloride) and ABS (acrylonitrile butadiene styrene) are also among the new-generation piping that’s been widely used in homes built since the 1970s. As one of the most durable and long-lasting pipes, PVC and ABS piping is:

While this type of sewer piping is not heat-tolerant—and it can be susceptible to cracking if the walls are thinner, it’s still one of the most popular options for sewer line pipes.

When it comes to sewer line pipes, the bottom line is that:

You can also contact us online for non-emergency sewer line service.

With Len The Plumber, you can always expect:

We invite you to experience our excellence for yourself, and we look forward to helping you with any of your plumbing needs!