What Are the Pink Stains in My Shower, Sink, and Toilet? 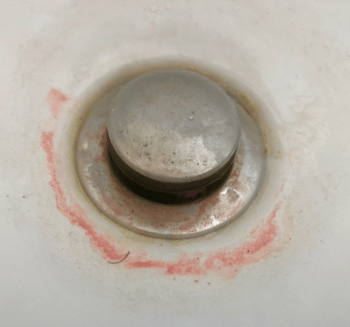 It’s a question we hear frequently, and we know there’s nothing pretty about pink when you see it stained onto the surfaces of your sink, shower, or toilet. So what’s causing these mysterious pink rings? And why does it keep coming back after you’ve scrubbed it away?

While many people believe the stains to be a sign of poor-quality or overly metallic hard water, most likely it is a bacteria known as Serratia Marcescens.

What is Serratia Marcescens?

Serratia Marcescens is a very common type of bacteria known for its pinkish-red color and slimy texture. It can be found in soil, food, and even animals. It is carried by air where it seeks out moist or dusty conditions in which to call home.

Once Serratia Marcescens has settled in a damp spot, such as around the drain of your sink, it has everything it needs to survive: standing water, open air, and the consistent introduction of phosphates and fats (this comes courtesy of soaps, gels, shampoos, and human waste products).

The appearance of pink residue in showers, sinks, and toilets tend to be more widespread during the summer months when the humidity and temperatures are higher; this is especially true when the windows have been kept open for extended periods of time.

While Serratia Marcescens isn’t pleasing to the eye, especially for those of us who take great care to keep our home immaculate, the good news is that it’s generally not harmful to healthy humans. However, studies have shown that the bacteria are pathogenic to a small percentage of people, and it’s been linked to urinary tract infections, wound infections, and pneumonia in hospital environments. So, it’s important to keep it at bay as much as possible.

How to Clean Pink Stains in the Shower, Sink, or Toilet

Once Serratia Marcescens has made its mark on your shower, sink, or toilet, getting rid of it using a bathroom cleaning solution is fairly easy. However, you can also try chemical-free solutions, such as creating a mixture of one-part vinegar and one-part water. Simply spray the mixture over the stained area and scrub away with a soft bristle brush (it’s important to use care with abrasives to avoid scratching the fixtures; gouged surfaces are more susceptible to bacteria growth).

For heavier or more set-in, stubborn stains, you’ll need to put in some extra elbow grease or may need to resort to chlorine bleach, which is a surefire way to clean away that pink gunk.

Pro Tip: When cleaning a toilet bowl with pink stains, flush the toilet and quickly turn off the water to stop the bowl from filling back up. This will make cleaning easier and stop your cleaner from becoming diluted.

Unfortunately, it’s a safe bet that Serratia Marcescens will be back. So, if you’re tired of seeing it and scrubbing it, try preventing it. That means getting into the habit of drying your sinks and showers after every use with a rag or squeegee. In addition to getting rid of standing water, be sure to clean all of your bathroom surfaces – including your toilet bowl – regularly. Without grime, waste, and soap scum to feed on, the bacteria is less likely to grow.

Like most bacteriological organisms, Serratia Marcescens can’t live in chlorinated water which is why you’re unlikely to see it around your pool. However, over time, chlorine does dissipate from water which could turn areas around your pool into a breeding ground for the bacteria. In addition, home water filtration systems that remove chlorine disinfection from the water, among other things, have become more popular in recent years, which may account for the increase in calls plumbers receive these days regarding that pink slime.

Lastly, if you have any leaks, fix them. Even the tiniest drips from a faucet can cause water to pool by the drain, allowing bacteria to form. If you suspect a leak, break out the DIY tools or call your local Sacramento plumbers, Express Sewer & Drain, for help – and then say sayonara to Serratia.