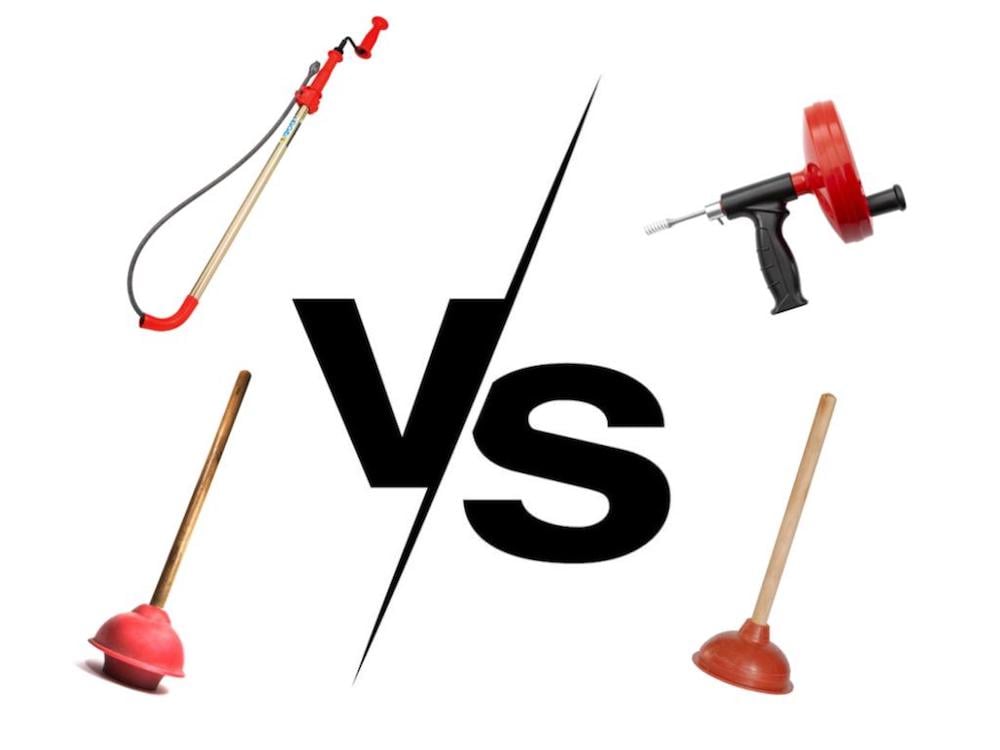 It’s not uncommon for DIY homeowners to treat toilet drains and flat drains (sinks and tubs) as one and the same. They’ll often use one snake and one plunger to solve for clogs in both. However, these types of drains are different, and for best results, you should use a different type of snake and plunger. Because, despite having the same function, they each work a little differently.

The toilet auger, also known as a water closet auger or a plumbing snake, tends to be more heavy-duty than drain snakes. They also typically have special bowl guards to minimize damage to your porcelain god. They operate via a manual crank, and the coil winds its way down the blocked toilet drain until it reaches the obstruction. At that point, its closed-spear tip attempts to force its way through the clog, breaking it up and forcing it through the sewage system as normal.

The drain snake, also known as a top snake or drum snake, is made for sink and bathtub drains. These can be manual or automatic, but either way, they’re generally more lightweight than a toilet auger despite having a longer coil. When the coil reaches the obstruction, the big difference between snakes and augers comes into play. Rather than break up the obstruction, the snake uses its open hook tip to grab it and pull it out the way it came in.

So, can you snake a toilet? You can, if you’re in a pinch, but you risk damage to the bowl and the possibility of it becoming lodged in the drain.

Using a Toilet Auger or Snake

Now, because not many augers and snakes come with an instruction manual, here’s how to use both (and while they handle clogs differently, you’ll use them both in a similar manner).

How to Use a Toilet Auger

How to Use a Drain Snake

Not all plungers are created equal! So what’s the difference? The toilet plunger, which is technically known as a flange plunger, has a longer handle and a soft, smaller cup (known as a flange) that extends down the bottom end of the plunger. Because a toilet drain isn’t flat on a surface, the flange is designed to fit inside a standard toilet drain’s unusual angle, which creates a more effective seal. This allows the user to apply more force to the blockage.

The sink plunger, technically known as a cup plunger, is best for flat surfaces like sinks and bathtubs. Because the surface is flat, no flange is necessary. Instead, the flat cup works to create a vacuum over the drain and dislodge the clog.

How to Unclog a Toilet with a Plunger

Most of us have plunged a toilet or two in our lifetime. But have you ever wondered if there’s a better way to do it? If you appear to be backing up, stop flushing and let the bowl drain on its own (this may take up to 10 minutes). Grab your toilet flange plunger and look at the water level in the bowl. If the bowl is almost empty, add water with a bucket to fill the bowl halfway. It’s important to have an adequate amount of water in the bowl when plunging. This will improve the suction and ultimately lead to a more successful plunge.

If, after the allotted time, the water level remains full, shut off the water value and remove excess water into a bucket to get to the half-full level. Then, begin plunging with quick up-and-down thrusts. When you’re through, turn the water back on and try flushing. You may need to repeat the process several times.

How to Unclog a Sink with a Plunger

Start by covering the overflow drain, if there is one, with a wet towel. This will help prevent air from escaping, which decreases your suction power. Now, place your cup plunger for sinks securely over the clogged sink or shower drain. Assuming there is standing water, make sure it’s enough to completely submerge the cup (if not, add some water to increase suction). If there’s too much water, remove it into a bucket. Leave just enough to cover the cup.

Now, take the plunge! Apply quick and deliberate thrusts, directing the pressure down the drain without lifting the plunger enough to break the seal. Continue this for about 20 seconds. When you pull the plunger away, the clog should be cleared. If it hasn’t cleared, try again, but this time try creating a tighter seal by lining the rim of the cup with a small amount of petroleum jelly.

Pro Tip: If you’ve already poured drain-clearing chemicals into the toilet, tub, or sink, be sure to wear gloves, goggles, and a nose-and-mouth mask. Plunging can cause splashing, and you don’t want these dangerous chemicals to come into contact with your skin or eyes, or get into your respiratory system.

Need Help? Express Sewer & Drain is Here For You!

Snaking and plunging can’t remove all clogs. It’s a good place to start, but if the obstruction remains obstinate, call the professionals at Express Sewer & Drain for residential drain cleaning. We have special equipment that can likely take care of the issue in no time. Remember, it’s better to ask for a little help now than pay for a lot of pipe repair later!